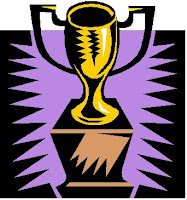 The October winner is the Englishist!
Her chosen review was in honor of Banned Books Week. Life is Funny by E.R. Frank. Let's just say it doesn't sound funny, but Akilah assures us that it does have its funny moments. Read her review here
Congratulations Akilah, I will be emailing you shortly :)
Also, as the holidays are fast approaching, I would love to read lots of 'best of' book lists and holiday book buying guides with a poc theme. So if you create one, please leave a link here (I'm thinking I'm going to buy a book for everyone in my family even if that's not what they want, haha).
Posted by MissA at 10:35 AM 1 comment:

Greetings, all you great readers and bloggers! I salute your challenge to read lots of books by and about persons of color. I have several authors to add to your list, below – some of my favorites.

I’m a white-bread American myself – but I’m married to an immigrant from China, and our daughter is biracial. I consider myself cross-cultural because I speak Mandarin Chinese and I spent ten years of my adult life living in Asia, first in Singapore and later in Hong Kong. In fact, I believe that a cross-cultural romance works best if both sides go more than halfway to understanding the loved one’s culture and language. And it takes respect - lots of respect on both sides.

Cross-cultural romance is at the heart of my new book, Daughter of Xanadu, to be published in Random House in January 2011. The main character, Emmajin, is a 16-year-old fictional granddaughter of Khubilai Khan, at the height of the Mongol Empire. She wants badly to become the first woman to join the Mongol army – until she meets Marco Polo, a man from a distant, backward land who challenges her core values. It’s that challenging of core values that gets us, isn’t it?

Here’s why I think you’d like Daughter of Xanadu, which is classified as young adult but should appeal to adults of all ages.

Second, Daughter of Xanadu takes place at a time in history when Asia was far more powerful than Europe. The Mongols ruled all the land from Russia to Korea, and they could easily have conquered all of Europe. Imagine!

Daughter of Xanadu is full of action and adventure, including a battle and a 'dragon' hunt, as well as an unconventional romance. But it also will make you think. I hope.

More about the book and me is at DoriJonesYang.com.

Now: my suggestions to add to your PoC list.

Lensey Namioka. Just about all of her books are great. Most are YA or middle grade fiction. She comes from China and is married to a Japanese. Yang the Youngest and His Terrible Ear first captured my imagination, as well as the three sequels about his older brothers and sisters. Her most popular book is Ties That Bind, Ties That Break. She also writes about biracial children in Half and Half.

Mary Matsuda Gruenewald, my friend, wrote a wonderful and inspiring book about her childhood, which was disrupted by her internment as a Japanese American. Her book, Looking Like the Enemy, is now available in a Young Readers version.

My children’s book, The Secret Voice of Gina Zhang, is about an immigrant girl from China who loses her voice when her family moves to Seattle. (ages 10 and up)

Adeline Yen Mah, Chinese Cinderella and its sequel, Along the River.

Justina Chen Headley wrote about “hapas” like my daughter in Nothing But the Truth (and A Few White Lies). I’d add North of Beautiful, which features a blonde girl who befriends an adopted Chinese guy and visits China.

Grace Lin is on your list with her picture books, but please add my favorite, Dim Sum for Everyone.

Linda Sue Park’s When My Name was Keoko takes place in Korea during the Japanese occupation. (I haven’t read her newest book, A Long Walk to Water, which takes place in Sudan.)

Sundee T. Frazier deserves a prominent spot on your list, too, as a biracial (black/white) author of Brendan Buckley’s Universe and Everything in It, as well as The Other Half of My Heart, about biracial twins, one of which looks white and the other looks black.

Jamie Ford’s Hotel on the Corner of Bitter and Sweet, about a tender childhood friendship between a Chinese American boy and a Japanese American girl, was written for adults but deserves a spot on your list, too.

We would love to spotlight some of your reviews! Please email Pam if you'd be willing to have one of your POC Challenge reviews highlighted here. Her email is pam@eurobands.us and if you include a picture of yourself (if you have one) and a short bio it will make the spotlight that much better!